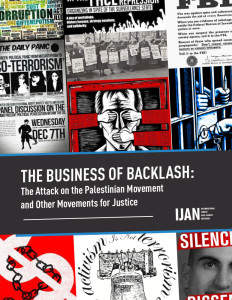 IJAN is excited to release our new report, The Business of Backlash: The Attack on the Palestinian Movement and Other Movements for Social Justice, which reveals the financing behind the attacks across the United States against those who have been organizing in support of Palestine. This long awaited 124 page report, which synthesizes thousands of pages of tax returns, demonstrates that a small handful of individuals, including right-wing donors Sheldon Adelson, the Koch Brothers, Newton and Rochelle Becker, the Sarah Scaife foundation and the Bradley foundation are responsible for a huge portion of this funding. These same donors, many of whom earned their wealth from or are invested in industries that profit from war and instability in the Middle East, are involved in attacks on other progressive causes.

Members of Jewish communities across the US and around the world support Professor Rabab Abdulhadi and call on SF State President Wong to stand firmly behind her against Tammi Rossman-Benjamin’s vicious attacks.

I write to provide a response to the false allegations made against me by the AMCHA Initiative in its latest escalation of the McCarthyist repression campaign to silence discussion of Palestinian rights on campus.

The accusation that I misrepresented the nature and purpose of my January 2014 trip to Palestine and Jordan is false.

The record, including documents which AMCHA cites, demonstrates that my application for travel authorization was transparent and accurate. In five separate documents, I noted that the purpose of the trip was to attend an international conference and to research, network, and collaborate with potential university partners towards a possible memorandum of understanding between San Francisco State University (SFSU) and Palestinian universities.

From Northeastern University to San Francisco State University to New York University, IJAN has been involved in organizing local, statewide and national defense against campus backlash. We are outraged by the misuse of anti-Semitism and the struggle for civil rights to repress freedom of speech, academic freedom and anti-racist organizing and to protect the ongoing… Read more »

It is disturbing but unsurprising that as Students for Justice in Palestine (SJP) chapters continue to lead the way in championing the Palestinian cause on college campuses and indeed across the nation, yet another SJP – in this case, at New York University – is accused of antisemitism for its defense of Palestinian rights. In this case, as with all false claims of antisemitism, the International Jewish anti-Zionist Network stands with NYU SJP in rejecting such charges.

The facts speak for themselves, and show a consistent pattern of pro-Israel supporters exploiting and misusing the history of anti-Jewish persecution in an attempt to stop criticism of Israel, and to attack Palestinians organizing for their rights, as well as those who support them in that work.

On the morning of April 24, NYU SJP distributed eviction notices to over 2000 students “at large” living in two student residence halls. The notices ordered them to leave their dorm rooms, noting that they would be demolished within three days. At the bottom of the fliers was a clear advisory, stating, “This is not a real eviction notice.” Such fliers are a widely-used tactic, meant to raise awareness of the home demolitions that the Israeli Occupying Forces carry out constantly in the occupied West Bank –189 homes in 2012 alone.

Recently AMCHAInitiative launched false accusations of anti-Semitism at the General Union of Palestinian Students (GUPS) and the Arab and Muslim Ethnicitiesand Disasporas Initiative (AMED) and is campaigning to have the above groups sanctioned by the SF State University. Below is a letter sent to President Wong by IJAN. Please support GUPS and AMED:

3.     Organize events to educate and publicize the struggle for justice in/for Palestine as an indivisible part of justice for all and insist on our right to academic freedom and campus activism.

http://electronicintifada.net/blogs/nora-barrows-friedman/event-honoring-edward-said-prompts-zionist-smear-campaign-against-san By Nora Barrows-Friedman, Tuesday 11/26/2013 An anti-Palestinian group is mounting an attack against students at San Francisco State University. Following an on-campus event honoring a mural of the late Palestinian scholar Edward Said, the group asserted that an artistic stencil glorified “the murder of Jews.” The university’s president, at the urging of pro-Israel advocates,… Read more »

TheInternational Jewish Anti-Zionist Network (IJAN) protests in the strongestpossible manner the arrest and detention of civil rights worker Rasmea YousefOdeh, on October 22, 2013, from her home in Chicago.

Ms. Odeh, aPalestinian lawyer, arrived in the United States 20 years ago after sufferingbrutal arrest by the Israeli military for her work for Palestinian freedom andrights. Rasmea’s arrest led to years of unspeakable,inhumane, and illegal torture by Israeli prison authorities. Since her arrival,she has worked for the civil and human rights of Palestinians and Arabs. Since2004, she has worked with the Arab American Action Network (AAAN) as theAssociate Director. She also managed the Arab Women’s Committee of the AAAN andfought to defend women’s and immigrants’ rights. She recently won theOutstanding Community Leader’s Award from the Chicago Cultural Alliance.

Ms. Odeh wascharged with an immigration violation, but we believe that this is an excuse toremove an effective human rights worker from the American society and instillfear in others who dare to work for human rights and equal rights forPalestinians. As with the Grand Jury subpoenas of the 23 Palestinian humanrights and anti-war activists in Minneapolis and Chicago in 2010, theinhumanely long prison sentence of the Holy Land 5, and the infiltration andtargeting of Muslim groups by FBI informants, the arrest of Ms. Odeh is meantto send a message to those who work for and believe in human rights for allpeople: the U.S. will not tolerate criticisms of its pro-Israeli policies andsupport.

Thisreflects a long history of collaboration between the United States and Israeligovernment, military and police in repressing popular movements for justice andliberty and organizations that work on their behalf. Beyond the Palestineliberation movement, this includes the Black Liberation Movement, the SouthAfrican anti-apartheid struggle, the United Farm Workers, the Center forConstitutional Rights and countless others. Most recently, the US NationalSecurity Administration was exposed for spying on its general population andsharing the information it gathers with the State of Israel. The leadcontracting agencies the NSA partners with in its spying are run by formerpersonnel of the intelligence branch of the Israeli military.

IJAN callson the US Attorney Barbara McQuade to drop the charges against and immediatelyrelease Rasmea Yousef Odeh, and the cessation of policies to instill fear inhuman rights activists and workers.

The International Jewish Anti-Zionist Network (IJAN) thanks you for taking the principled course of action: publicly refusing to participatein Israel’s presidential conference, chaired by the notorious war criminal Shimon Peres. Our own recent history as Jews vividly presents to us the culpable role of those who merely stay silent in the face of state-organized racism and violence.

We further commend your decision to publicize the reasons for your withdrawal in a form that conveys your understanding that the primary obligation of people of conscience everywhere is to listen to Palestinians who suffer Israel’s oppression and act in solidarity based on their analysis and demands. Your actions set an example for conscientious engagement as a scientist and as a public figure. We hope that your example will inform and in turn move more scientists, intellectuals, and artists to action.

As with others who followed the same course, in the coming days many powerful people will subject you to a barrage of abuse. The primary purpose of this barrage is to frighten others who might want to emulate you but do not feel as confident in their ability to withstand the public attempts of character assassination. We therefore also write to you to encourage others. While those who appreciate what you did donot hold high office nor own newspapers and TV channels, we are the majority of humanity and we deeply appreciate you.