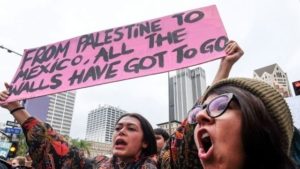 “Accusations of antisemitism, which have been leveled at the National Women’s March since its beginning in 2017, are now fracturing the movement. As anti-racist Jewish women and queer, transgender, and gender non-conforming people who have participated in Women’s March activities, we’re deeply concerned about allowing a political rift to weaken a much needed liberatory movement at a time when the need for progressive unity is greater than ever.

The accusations reveal a conflict over the character of the feminist movement that came together in opposition to Trump’s Agenda. Like other U.S. feminist movements, Women’s March supporters have repeatedly struggled over whose voices and experiences to emphasize. Historically, the mainstream feminist movement has not centralized the most marginalized and for many, this is a reason they have distanced themselves from the “women’s movement.” Working against this tendency, coalitional feminist movements have promoted equal voting rights for Black people and women, labor rights, welfare rights and other support for single mothers, the rights of incarcerated people, the rights of lesbians, queer and transgender people – and many more intersectional issues. Now, accusations of antisemitism may harm efforts to make human rights and the liberation of Palestinian people central to a liberatory, intersectional feminist movement.

Zionist organizations have waged a three-year campaign to smear the Women’s March with unfounded accusations of antisemitism, largely because its leadership includes Linda Sarsour, a Palestinian American, and through her leadership, Palestinian freedom, interfaith coalitions and anti-racism are represented as integral to feminist liberation. The attacks on Sarsour and the Women’s March are the latest manifestation of a long campaign to silence Palestinians and prevent the inclusion of the Palestinian struggle in progressive politics.

Women’s march co-chair Tamika Mallory has also been targeted with charges of antisemitism because of her connections with the Nation of Islam and its leader Farrakhan (who repeatedly makes antisemitic remarks) even though Mallory has categorically condemned antisemitism. We denounce all anti-Jewish rhetoric, but we also reject a politics based on guilt by association. We decry a focus on anti-Jewish statements by leaders of color, while ignoring white elites and nationalists who articulate similar hatred with much more power behind it.

We see the charges of antisemitism against the Women’s March as part of a broader, pernicious pattern of attack against academics, students and working people who increasingly support human rights and freedom for Palestine and the tactic of Boycott, Divestment and Sanctions (BDS) which is being used to help achieve that goal.

Today antisemitism is central to white nationalism in the U.S. The horrific massacre at the Tree of Life synagogue, where the shooter combined anti-immigrant racism with a conspiracy theory about Jews and migrants, is a tragic example of the power of this racist ideology. Targeting the Women’s March for antisemitism deflects from the real perpetrators of antisemitic violence and undermines a progressive force that is part of confronting white nationalist, misogynist, homophobic power that is gaining momentum across the U.S. today.

As feminists, we know that our liberation is bound together with struggles against racism, mass incarceration, state violence, occupation, war and colonization; with the liberation of poor and working class people; with resistance against the exploitative economy that decimates people, land, life, and the planet itself; and it includes queer, transgender, gender non-conforming people and people with disabilities. As Jews, we know there can be no Jewish liberation without the liberation of all people.

We the undersigned commit ourselves to that transformative possibility and the solidarity found in struggles for collective liberation.”