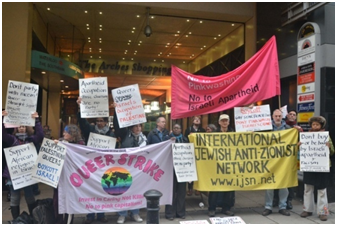 The UK chapter of IJAN was launched in 2008. From the beginning we have prioritised our accountability to the Palestinian struggle, worked with others in the Palestinian solidarity movement (members of IJAN are currently working as part of London Palestine Action) and other grassroots movements impacted by Israeli apartheid, murder, repression, militarization and other brutality.

On 20 November 2012, under the shadow of the Israeli bombing of Gaza, a Jewish anti-Zionist panel spoke about Confronting Zionism at the London School of Economics (LSE) – organised by LSE Student Union Palestine Society.

Yael Kahn & Michael Kalmanovitz (both IJAN) spoke about their rejection of, and campaigning against, Zionism; also speaking was John Rose from the British Committee for Universities for Palestine (BRICUP). Thepredominatly student audience was transfixed when Yael spoke about her discovery that her family home was on stolen land. The meeting was chaired by Emeritus Professor Jonathan Rosenhead (BRICUP).

On4 February 2013, at the Crossroads Women’s Centre, six activists described their campaign against the multinational Veolia which profits from and supports the Israeli occupation of Palestine, and withdrew froma £4.7 billion contract with the North London Waste Authority.

On April 20, Michael Letwin addressed a London forum cosponsored by IJAN, Laborfor Palestine-U.S. and the British Committee for Universities of Palestine(BRICUP). Topics included the Irish Congress of Trade Unions BDS conference(above), and the role of Labor-Zionism and the Histadrut in spearheading andcamouflaging racism, apartheid, dispossession and ethnic cleansing againstPalestinians.