AROC works for both the empowerment and dignity of marginalized Arab communities and also with individuals and organizations from a wide range of communities impacted by racism and injustice. The program must include AROC as a partner not only because of their longstanding work on language access in the city of SF, and the fact that they are the only organization providing legal services in Arabic in Northern California.  But also because of AROC’s work organizing and mobilizing the Arab community for their rights and their leadership in cross-community collaboration in service of racial justice. 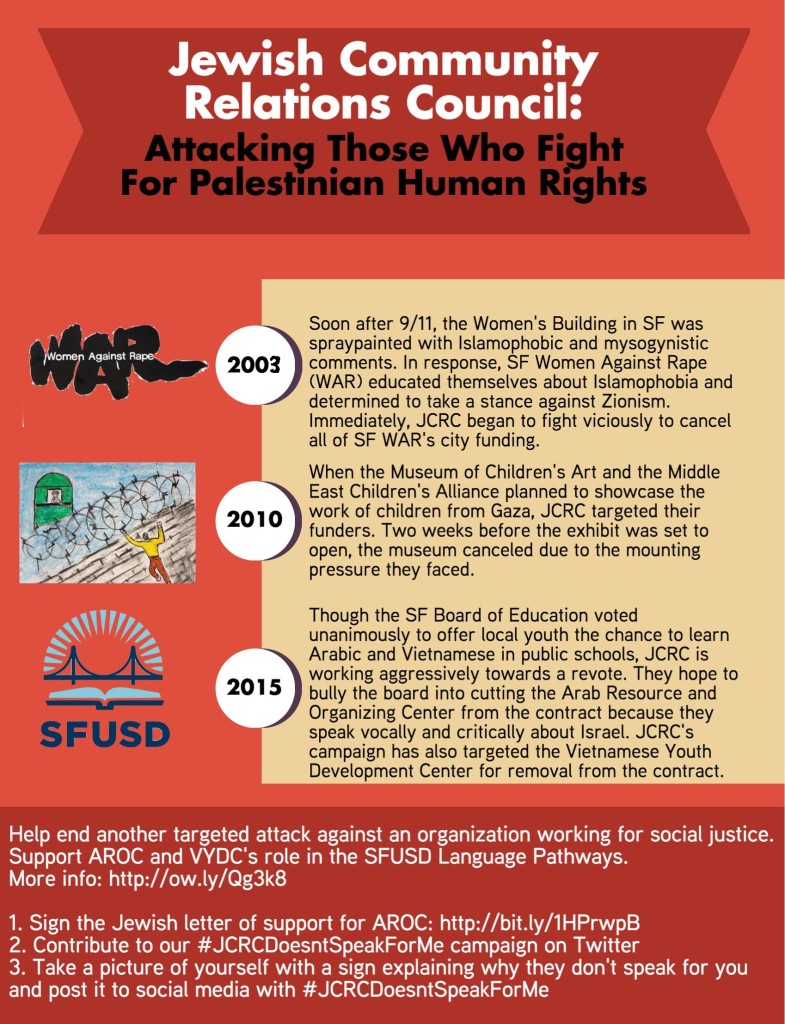 Who They Are, What They Claim:

JCRC is a group that claims to represent the Jewish community whose staff and resources primarily focus on defending Israel and attacking those who express solidarity with Palestine. JCRC has 125 chapters in the United States and function as local public affairs organizations operating under the Jewish Council for Public Affairs (JCPA) umbrella organization.

Over the years, JCRC of San Francisco has attacked numerous people of color-led, community-based organizations who have taken a stand in support of Palestinian rights and self-determination. One of the most common tactics of the JCRC is economic coercion—threatening the funding of organizations by reaching out to their funders and claiming that the organization is practicing antisemitism simply for taking a stance for Palestinian human rights. They then demand that the organization apologize for this solidarity and go against their own principles in defense of Israel in order to protect their funding for the community-based services they provide.

The JCRC does not speak for, serve or represent the views of all or likely most Jewish individuals and communities in the Bay Area…and certainly not those of us who believe in principles of equality, justice, and diversity. Jewish communities, like all communities, are diverse in our opinions and perspectives – to reduce the Jewish community to a single perspective, as the JCRC has done, is disrespectful and inaccurate.

1999: Pilar Meija, Principal at Cesar Chavez High School –Removed from her position for remarks encouraging more Latino teachers to be hired to teach Spanish speaking students instead of teachers not of Latin American descent. JCRC told SF Superintendent Bill Rojas this was part of a larger issue of Jewish teachers being discriminated against. Rojas was then unwilling to work towards resolution and transferred her out of the position without any notice.

2003: SF Chronicle – JCRC successfully pressures the SF Chronicle to fire a Jewish writer who wrote about Intel Corp.’s Fab 18 chip plant in Qiryat Gat, Israel, which was responsible for $1.8 billion in exports. The column was controversial because of the land ownership issues stemming from the 1948 Arab-Israeli war. Pro-Israel organizations accused him of being anti-Semitic, which he denied, pointing out that he is Jewish.

2003: SF Women Against Rape (SFWAR) – Following 911 and an escalation in attacks on Muslim communities and women, the Women’s Building in SF that housed SFWAR was spray-painted with graffiti about “raping Muslim women”. In response, SFWAR had a teach-in to educate themselves on anti-Arab, anti-Muslim racism including a discussion on the role Zionism plays in this racism. Following the teach-in and several discussions, SFWAR added Islamophobia and Zionism to the list of oppressions that they stand against. As a result, JCRC lobbied SF to freeze SFWAR’s contract until SFWAR remove the reference to Zionism from its policies. After hundreds of hours of staff and Board time defending itself they successfully unfroze the contract,releasing the much needed funds to provide rape prevention and support services to women of color in SF.

2007: Homey – SF –After designing a youth-led mural reflecting solidarity withBlack and Brown struggles including the Palestinian struggle, JCRC targeted Homey’s city funding and demanded that they remove the imagery of Palestine and a Palestinian woman wearing a kuffiyeh. Homey was forced to make changes to the image including removing the shape of map of Palestine. Following this incident, Homey lost much of its foundation and city funding and was forced to make permanent cuts to staffing and programming.

2007: Archbishop Desmond Tutu – The University of St. Thomas disinvited Archbishop Desmond Tutu to speak on campus because the Minneapolis JCRC told school administrators that he was “anti-Israel” and had made remarks likening Israel to Hitler. The remarks later proved to be completely fabricated by the Zionist Organization of America. The University ultimately re-invited Tutu.

2009: East Side Arts Alliance – Following the murder of Oscar Grant by BART police and the Israeli attack on Gaza, Eastside Arts Alliance and the Gaza Action Committee organized an event on state-sponsored violence from Gaza to Oakland. Following the event, the ADL and JCRC published articles denouncing the event as antisemitic. Both organizations then approached the pro-Israel Haas Foundation to request that the foundation use its influence as a funder of Eastside Arts Alliance to pressure the organization to issue an apology. Eastside agreed to take down and write a brief apology for the image that a young person created that they felt was inaccurate and inappropriate but declined to apologize for the event that reflects their guiding political principles and program work. While they lost Haas funding, they were able to raise other funds from those who respected their principled stance.(See E-Flyer by IJAN)

2010: Middle East Children’s Alliance/MOCHA –An exhibit planned to show artwork from children in Gaza was cancelled 2 weeks prior to its opening due to JCRC and other Jewish organizations pressure on MECA’s funding sources and the Museum of Children’s Art (MOCHA). JCRC used their institutional power to censor the images and experiences of children in Gaza. On the day the exhibit was supposed to open, many people gathered in front of MOCHA to protest this decision and then marched to an alternate venue where they were able to hold their exhibit.

2014: Ethnic Studies Curriculum for High Schools –During a historiccampaign to institute ethnic studies curriculum in SFUSD high school classrooms, JCRC opposed the effort for its relationship to SF State College of Ethnic Studies because it houses the Arab Muslims Ethnicities and Diasporas program.

2015: Arab Resource and Organizing Center (AROC) – JCRC is attempting to convince the San Francisco Board of Education to revote on a resolution that the board passed unanimously on May 26, listing AROC and the Vietnamese Youth Development Center as community partners who championed the campaign to implement Arabic and Vietnamese language pathways in SFUSD. This initiative, born of an inspiring community effort, would expand the opportunity of Arabs and Vietnamese to have their languages and cultures better represented in the schools they attend. Over the last month, JCRC has viliﬁed AROC on media, pressured public ofﬁcials to strike them from the contract, and have been attempting to intimidate any allies for supporting them.

Let’s stop JCRC’s ongoing history of attacks TODAY…Please sign on to the community support letter (linked below) to urge the Board of Education’s continued support of AROC and their role in developing the Arabic language pathway in SFUSD. http://bit.ly/1gDbhmA