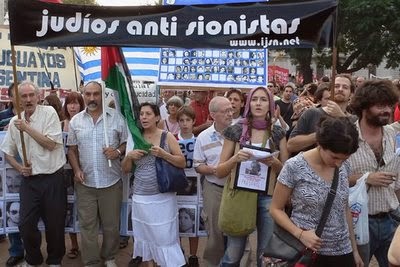 IJAN Argentina participates in the Committee of Solidarity with the Palestinian People of Argentina (COARSPP), which consists of dozens of grassroots anti-imperialist and human rights organizations in Argentina.

InArgentina, IJAN presented with the Malcolm X Grassroots Movement atthe Universidad Popular Madres Plaza de Mayo. The university wasfounded by those involved in the movement of mothers to identify andhold the government accountable for the "disappearance" of theirloved ones during the military dictatorship of the late 70s and early80s. In spite of a subway strike and the plumbing in the building notworking, we had an audience of 50 who listened with rapt attention.We presented with and were hosted by the Departmentof Genocide and Social Forces.

InVenezuela IJAN and MXGM had the opportunity to learn from and shareinformation with grassroots activists that are part of therevolution. Participants witnessed the opening day of apartments foralmost a thousand people, spoke at a university in the heart of the Afro-Venezuelan communities, were interviewed on national and local radio, and spoke with social movement activists from a number of different organizations.

The first thematicWorldSocial Forum to focus on Palestine tookplace in Porto Alegre, Brazil from 28 November – 1 December 2012.The Forum featured over 125 workshops and a large march and rally insupport of Palestine. It was an important gathering of Palestinianand solidarity activists to continue to strengthen the movement forPalestinian liberation and self-determination.

IJAN sent adelegation of six to the forum including members from Canada,Argentina and the U.S. Most of us attended as part of the U.S.-CanadaJoint Struggle Delegation – adelegation of 25 activists working in grassroots struggles for theliberation of people and land, which IJAN played a central role inorganizing.

[This article from hispantv.comtalks about a recent IJAN initiative, but the original article includes a picture from Neturei Karta,not IJAN.

IJAN in Argentina wasvery active in real-time reporting on the Gaza Freedom Flotillaapproach to Gaza and the Israeli attack. (http://judiosantisionistasargentina.blogspot.com/2010/05/y-la-nave-va.html ).The excellent press release published in English by IJAN was translated intoSpanish in collaboration with  IJAN activistsin Spain and France, and published (http://judiosantisionistasargentina.blogspot.com/2010/05/comunicado-de-ijan-por-la-masacre.html ).

Throughout the history of popular liberation struggles, therehas been significant Jewish participation. This participation has beensabotaged by the historic and progressive ethnic cleansing of Palestineby the state of Israel.
In Argentina between 1978 until 1982 the Israeli government, theJewish Agency and other official groups have curbed the immigrationsolicitations of Jewish leftists whose lives were in danger in order tomaintain good commercial and political relations with the militarydictatorship in power. In the same period, Israel realized the sale ofarms valued around one thousand million dollars with Argentina. Likudas well as leaders of the Labor party were directly complicit in thisplot of silence.
Zionism, the founding ideology in Israel, has it’s roots inthe era of European colonization and disseminated a continuation ofNazi genocide. Zionism grew in the most violent and oppressive eventsof the nineteenth century, weakening the numerous Jewish militantliberation struggles. Honoring those struggles and to reclaim thespaces of those vibrant popular movements of our time, Zionism and allof it’s forms need to be abandoned.

Today we march in solidarity with the memory of the victims ofArgentinian state terror in the monstrous years of repression and alsoas Jewish with the people of Gaza and all of Palestine, victims ofIsraeli state terror, expulsion, oppression, torture and assassinationduring the last 70 years.