The International Jewish anti-Zionist Network salutes the 1500 prisoners on collective hunger strike in the Israeli regime’s colonial prisons – the largest such action in half a decade.

The strike demands basic human decency for the prison system’s 7000 detainees, including 300 children. In Israel’s prisons, improved treatment for the imprisoned has only come through struggle from below. The demands include ensuring appropriate medical care, ending abuse, including administrative detention, torture and solitary confinement, and specific demands from women prisoners, including direct family visits with family members, including children, without barriers.

Fatah prisoners called the strike, which has since crossed party lines. The strike’s spokesperson, the imprisoned leader and Central Committee member Marwan Barghouti, noted, “the prisoners’ movement is the compass that guides our struggle, the struggle for Freedom and Dignity, the name we have chosen for this new step in our long walk to freedom.” The New York Times refused to publish his editorial in the domestic edition, exhibiting the US elite and its media’s long-standing commitment to the suppression of anti-colonial voices.

Furthermore, Michael Oren attacked the decision to publish the article on the last day of Passover – reflecting a pattern of using any pretext, particularly the misuse of Jewish religious ritual or Jewish suffering, to cover up colonialism and racism in Israel and elsewhere.

The Palestinian Boycott National Committee which coordinates Boycott, Divestment, and Sanctions (BDS) work internationally, stated it “fully supports the hunger strikers’ courageous fight for their rights and dignity. We call on people of conscience around the world to further grow BDS campaigns against Israel’s regime of injustice.”

Samidoun, the Palestinian Prisoner Solidarity Network, reported that the Zionist forces stormed the living areas of strikers in reaction to the strike, and moved them from one location to another in an attempt to weaken them.

Barghouthi linked the strike to struggles against similar racist, colonial regimes: “Israel has tried to brand us all as terrorists to legitimize its violations, including mass arbitrary arrests, torture, punitive measures and severe restrictions…Israel is not the first occupying or colonial power to resort to such expedients.”

Meanwhile, Palestinian lawyers and Palestinian women prisoners have taken steps to support the strike. Others have undertaken their own support efforts and solidarity fasts, including activists in Algeria and a Black for Palestine activist in the United States. People have also protested across the West Bank’s cities, as the prisoner movement galvanizes popular sentiment not merely in Palestine or in the Arab world, but internationally. 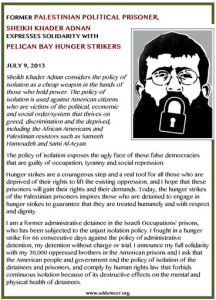 The International Jewish anti-Zionist Network is proud to add our voices to those supporting the strike, and takes inspiration from the commitment and courage of the Palestinian prisoners’ movement against the racism Israel practices both inside and outside the walls of its illegal prisons. We lift up the demands of the imprisoned who are denied their right to family visits as a way of punishment from Israeli authorities: appropriate medical care, the ending of abuse, including administrative detention, torture and solitary confinement, as well as the specific demands from women prisoners – direct visits with family members, including children, without barriers.