In Argentina, IJAN presented with the Malcolm X Grassroots Movement atthe Universidad Popular Madres Plaza de Mayo. The university was founded by those involved in the movement of mothers to identify and hold the government accountable for the “disappearance” of their loved ones during the military dictatorship of the late 70s and early 80s. In spite of a subway strike and the plumbing in the building not working, we had an audience of 50 who listened with rapt attention. We presented with and were hosted by the Department of Genocide and Social Forces.

The Case of Jews and African Americans against Zionism and Israel’s Worldwide Role in Repression from Intl Jewish Anti-Zionist Network on Vimeo. 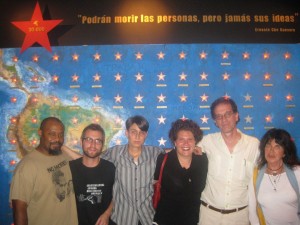 In 1966 a brutal military dictatorship began including the torture and “disappearance” of an estimated 22,000-30,000 left-wing activists, trade unionists, students, journalists, and other alleged anti-regime civilians. The Argentinian regime and its supporters also targeted its Jewish civilians and espoused anti-semitic rhetoric.Although just 2% of Argentina’s population was Jewish, between 10-15% of the people who were arrested, tortured and disappeared during the Junta were Jewish.

Israel sold arms to Argentina during this period.Rather than condemn the military Junta,Israel worked with the Argentinian government to establish a program called “the Option,” allowing a small number of Jews to flee to Israel. It used, rather than confronted, the regime’s anti-semitism to facilitate Jewish emigration to Israel and hesitated to publicly confront the dictatorship due to its arms trade with Argentina at the time.

It was particularly powerful to present IJAN’s work in Argentina given all of this history. 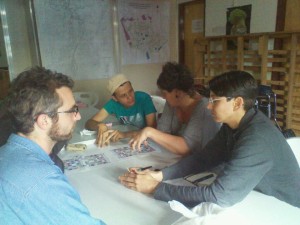 In Venezuela IJAN and MXGM had the opportunity to learn from and share information with grassroots activists that are part of the revolution. Participants witnessed the opening day of apartments for almost a thousand people. Like similar projects around the country, they were being provided free-of-charge to families who had lost their homes in landslides and storms. From taxi drivers and organizers to contractors and professors, we saw a commitment to the main charge of the revolution – redistributing the resources of the public for the good of the public. Here is a link to the website of Moviemiento Voces, one of the organizations we met with.

As such, the Venezuelans we met and were interviewed by understand the investment that the US, Israel and corporations have in undermining the revolution. Thus, the work that IJAN and Malcolm X Grassroots Movement are doing to expose Israel’s worldwide role in repression and opposition to progressive movements and governments was of great interest. Many organizations, government representatives, journalists and activists expressed an interest in partnering on a tribunal in Venezuela and across South America to expose the role of Israel, often in partnership with the United States, in undermining popular movements, progressive governments and the well-being and safety of communities across the continent. The expected destabilizing impact in Venezuela of six military based being built in Colombia by the United States was of specific concern. 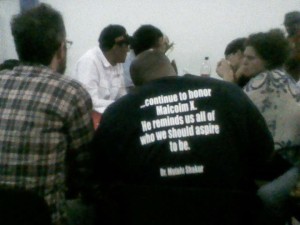 Per arrangements made by Malcolm X Grassroots Movement, we also traveled to Barlovento, the heart of Afro-Venezuelan communities to present at a university about the role of the U.S. and Israel in repression. Many Afro-Venezuelan activists support the revolution and have also built an autonomous struggle that recognizes and seeks transformation of the specific history of racism and exploitation that Venezuelans of African descent have experienced. The same is true for the struggle of women in Venezuela. We spent time with Nora Castañeda, President of Vz’s Women’s Development Bank – Banmujer. She described the Chavez government’s commitment to women’s economic self-sufficiency and Article 88 of the constitution that protects women from over 18 forms of violence -from institutional to intimate. Again, the struggle of women is part of the revolution and women’s leadership was and remains central to the on-going process of revolution toward redistribution of power and resources for justice. 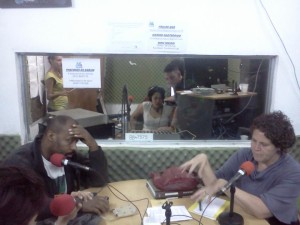 We spoke on local and national radio, and were interviewed by local and national print journalists.Everywhere we went the audience was very engaged and interested to learn about the content, help us build it, and to know more about the situation of popular movements in the United States. It was an extraordinary experience to present and be interviewed in a country where the leadership is explicitly anti-Zionist and the national media is similarly explicit in its solidarity with Palestine and opposition to Israeli occupation and Zionism.

During the 2009 Israeli attack on Gaza, Chavez removed the Israeli ambassador from Venezuela. At that time IJAN wrote a letter of support to Chavez -acknowledging the unique and crucial role that his leadership plays in posing opposition and as an alternative to the global systems of capitalism, exploitation, occupation, colonization and racism that Israel, the United States and its allies maintain and from which they benefit. (see below for the full text of IJAN’s letter in support of Chavez)

We write to thank you for taking a public stand in support of Palestinian resistance against the Israeli onslaught. Yours is the first government to do so. We welcome that you have called on Jewish people to oppose the criminal policies of the Israeli state.

We are activists for social change from various countries around the globe, including Latin America and the U.S., who are uncompromisingly opposed to imperialism and occupation in whatever form, anywhere in the world,and who take it as our responsibility to stand and organise against Zionism. We are working with the Palestinian liberation struggle and solidarity movement to demand that governments in the two Americas, Europe, Africa, Asia and Oceania, follow your example and immediately break diplomatic and also commercial relations with the state of Israel in the wake of the horrible destruction and death perpetrated against the Palestinian people in Gaza. We are gratified that Bolivia, Mauritius and Jordan followed your moral example and expelled their Israeli ambassadors.

Israel’s”Operation Cast Lead” in Gaza is of a piece with the U.S. “Shock and Awe” bombing and occupation of Iraq. It is genocidal. It is rooted in the same racism against the Indigenous people of the land as South Africa’s Apartheid and the Venezuelan and Bolivian elite’s attacks on indigenous people and dark-skinned people in Latin America. As Jewish and anti-Zionist activists, we are outraged by the cynical manipulation of the Nazi holocaust to cover for Israel’s crimes. We are committed to rescuing Jewish identities from the dead end of Zionism.

The charge of antisemitism is a familiar weapon of the state of Israel and its accomplices, Zionist organisations which claim to speak for ‘the Jewish people’. In fact, it is the assumption that all Jewish persons should support ethnic cleansing and colonial oppression that is antisemitic. Jewish-Israelis, having at their disposal one of the most advanced arsenals of weapons of mass destruction, are nevertheless portrayed as victims, and given the right to denigrate, persecute, maim and murder, appropriate land, water and other resources, deprive Palestinians of every necessity of life and deny their right for self-determination, all in the name of self-defence.

Even Israelis challenge this false notion of “security.” Residents of Sderot and other towns bordering Gaza have begged the government of Israel to maintain the cease-fire and accused it of “wasting that period of calm, instead of using it to advance understanding and begin negotiations.” With United States, European Union, and Egyptian collusion, Israel imposed a siege and blockade for over two years, intentionally preventing Gaza’s economic recovery, degrading its civilian infrastructure, attempting to dismantle self-governance, preventing travel and obstructing humanitarian aid. That siege, which was and continues to be a gross violation of human rights and a crime against humanity, led directly to the present escalation. Unless Israel is stopped, the next step will be the expulsion of Palestinian people in Gaza from Palestine. This has and will continue to be a deliberate and planned process of ethnic cleansing-one that operates through making life unbearable, forcing Palestinians into refugee camps, taking ever more control of land, water and air, and destroying any Palestinian autonomy, capacity for resistance, or self-governance.

President Chavez, you have given an example of courage and boldness. This is not the first time Venezuela has shown the way. Two years ago when Israel invaded Lebanon, you expressed and demonstrated solidarity with the Lebanese people. These acts, demonstrate why the Bolivarian Revolution inspires social movements around the world, as it brings together the aspirations of the Venezuelan people with the aspirations of people suffering under Western imperialism throughout the world.

The Nicaraguan Father Miguel d’Escoto Brockmann, president of the UN General Assembly, has received death threats for speaking of Israel’s”apartheid policies” and asking the UN to “consider following the lead of a new generation of civil society, who are calling for a similar non-violent campaign of boycott, divestment and sanctions [as with apartheid South Africa] to pressure Israel to end its violations.” It is no accident that this principled clarity came from another Latin American government representing the extraordinary revolutionary spirit that animates your part of the world today and shines ‘moral y luz’ on the rest of the world. We have launched a petition in support of President d’Escoto, which we attach.

While the massacre in Gaza is not an exception in Israel’s 60-year occupation of Palestine, it is the first time that the movement against Zionism and its imperialist lies has been able to break through. The general public is beginning to see the true face of Zionism and is responding with revulsion and condemnation.

We agree entirely that now is time to call together Jewish people around the globe to act with the Palestinian people against the racist and criminal Israeli state. Now is the time, instead of continuing to sell arms,gas and oil to Israel, to cut all connections to Israel in order to isolate it, in the same way that apartheid South Africa was isolated,by boycott, divestment and sanctions, as called for by Palestinians in 2005, and as endorsed by President d’Escoto.

Once again we thank you for your solidarity with the Palestinian resistance movement and for your prioritising of life and freedom over the murderous arsenal manufactured and financed by the United States, which would threaten the continuation of life in Gaza.