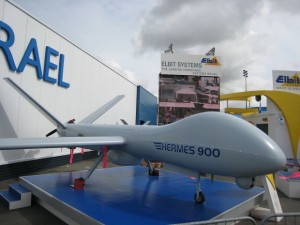 Maintaining and expanding an exclusive Jewish state in Palestine requires on-going ethnic cleansing and military repression of Palestinians and military dominance in the region. Through the ongoing colonization of Palestine and the accompanying atrocities, Israel has developed great expertise in repression, and exporting these tools and methods on an industrial scale has become crucial to Israeli economic and political power.

Since the founding of the state, Israel has collaborated with many of the most repressive regimes and forces on all continents. Israel played and/or plays a role in arming and training the apartheid regimes of Southern Africa, colonial and neo-colonial regimes in the Middle East, dictators in Central and South America and police forces in the United States.

Our movements across the globe – in solidarity with Palestine, against war, poverty, colonialism, imperialism, repression and an unjust globalized economy, and for more equitable societies – need to be aware of the very real ways the State of Israel contributes to the violence and repression targeting us.

IJAN works to expose Israel’s role in repression, not only of Palestinians, but through its military and homeland security exports, all over the world.

Download the appendix to the report “The Global Spread of Drones”

Researched, written, and edited by members of the International Jewish Anti-Zionist Network, this pamphlet focuses on the role of Israel’s government, its military, and related corporations and organizations in a global industry of violence and repression. The states most involved with this industry profit from perpetual war and occupation across the globe while maintaining vastly unequal societies of their own.

Available for download in: English, Spanish, French and Italian

A Case Study in Israel’s Worldwide Role in Repression

Since the initial publication of “Israel’s Worldwide Role in Repression,” members of the International Jewish Anti-Zionist Network have continued to research the specific role that Israel plays in contributing to global repression, and exposing this information to as broad an audience as possible. In that vein, this piece was written as a case study, documenting one prominent Israeli-developed technology that is increasingly influential in global war, policing and surveillance. Download “Israel’s Worldwide Role in Repression” in English, Spanish, French or Italian at www.israelglobalrepression.wordpress.com

Download the full pamphlet here: The Global Spread of Drones

In the wake of the decisions not to indict officers Darren Wilson or Daniel Pantaleo for murdering Michael Brown and Eric Garner, the Anti-Defamation League (ADL) – a Jewish organization purportedly founded to fight racism and anti-Semitism – has revealed itself to be once again standing on the wrong side of history. Not only did the ADL urge “calm” of protestors in the face of righteous anger against the state murder of Black people across the United States, they also stood with the St Louis grand jury: “we respect the grand jury’s integrity and their commitment to meeting the heavy responsibility thrust upon them.” And, adding insult to injury, the ADL praised the NYPD despite the shameful and brutal murder of Eric Garner and the midst of their violent repression of protestors.

On August 16th, 2014 the Front in Defense of the Palestinian People (Frente em Defesa do Povo Palestino) hosted a popular tribunal charging Israel with grave crimes for its attacks on the Palestinian people and its role in contributing to state repression in Brazil. The event, Popular Tribunal: Israel on the Defendant’s Bench featured powerful testimony from many important sectors affected by the Brazilian government’s close relationship with Israel, particularly its purchase of millions of dollars worth of Israeli weapons. Testimony from members of important social movements included the Homeless Workers’ Movement (MTST), Quilombo Race and Class (Black caucus), the Students’ Federations (ANEL and UNE) and Palestinians living in Brazil. The verdict presented by Judge Joao Batista Damasceno condemned Israel’s role in repression in Brazil itself and for supplying military equipment that Brazil uses in the UN occupation of Haiti.

The tribunal follows the people’s movement assembly organized at the World Social Forum Free Palestine in Porto Alegre by IJAN, Malcolm X Grassroots Movement and the Palestinian Youth Movement with testimony from organizers from across the globe. Here are links to the 7 part video of this assembly: pt 1, pt 2, pt 3, pt 4, pt 5, pt 6 and pt 7.

The full verdict and sentence from the Sao Paulo tribunal is posted below in English. To read more about the tribunal in Portuguese, click here.

Protesters Confront ADL Over Police Training [9/3/14 San Francisco, CA] On September 3rd, 2014 at 4:00 p.m. protesters will gather in front of the Anti-Defamation League office at 3rd Street and Market Street in San Francisco. The action, called for by the International Jewish Anti-Zionist Network (IJAN) and co-sponsored by the Arab Resource and Organizing… Read more »

IJAN participated in the Stop Urban Shield Coalition, an important campaign that reflects our work on Israel’s Worldwide Role in Repression and particularly the collaboration between the Israeli military and police forces across the United States. Below is the coalition’s statement upon achieving two major victories.

The following is a downloadable and printable half-page fact sheet about the role the Anti-Defamation League plays in policing and repression in the US. Downloadable ADL Fact Sheet

In Catalonia researchers are releasing an important new study today in honor of the Nakba. “DEFENCE, SECURITY AND OCCUPATION AS A BUSINNESS. Military, armaments and security trade relations between Spain and Israel,” released by Alejandro Pozo and his team, is a follow up to a 2009 report looking at the military and homeland security links… Read more »

From October 25th-27th armsmanufacturers and police forces across the world gathered in the Bay Area toparticipate in Urban Shield, a48-hour training exercise (i.e. war games) and homeland security industry tradeshow. While the stated purpose of Urban Shield is disaster preparation, itsoutrageous scenarios promote expanded anti-Arab and anti-Muslim racism andincreased militarization of the police with the disproportionate impact that hason people of color in the United States. Joining in these exercises were policeforces and militaries engaged in extreme repression including Israel, Bahrainand Brazil among others. Urban Shield reflects the globalized nature ofpolicing and surveillance, and Israel’s important place in it as explained inthe IJAN pamphlet, "Israel’s Worldwide Role in Repression." IJAN participatedin the organizing of the FacingUrban Shield Action Network (FUSAN) as they confronted this collaborationbetween repressive police forces. Visit their page for a full media roundup ofthe actions.